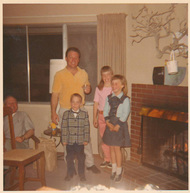 Last week my father, Ken Westbrook, passed away from complications of stage 4 lung cancer.  We rushed him to VA in Reno.  As a WWII veteran my dad had been receiving care from the VA for over 10 years.   The first minutes in the Emergency Room were tense because we had to ensure that my father's Living Will be honored..  It  specifically stated that no  heroic measures be taken to prolong  his life in the event that he had become terminally ill with no chance of recovery.. After he was made comfortable he was taken to a  large private room where he was given oxygen and medications to ease any anxiety and pain.  This type of nursing care is called comfort care and is often administered when a patient is dying.
Because he was not in the ICU he was not subjected to IV's, blood draws and the taking of vitals at regular intervals. He was not surrounded by flashing lights and all the noise that comes with taking care of patients who are expected to recover and leave the hospital.
The care that my dad received from the VA was compassionate,  caring and respectful. We would especially like to thank his night nurse Bruce and his daytime nurse Michelle.  They were never far from his door and checked on my dad frequently and were kind and compassionate to us as we waited through the long night..
When my father  died they draped the gurney with an American flag and wheeled it to the morgue. This is a ceremony that they perform when any vet passes away in the hospital.  We had no idea how touching and awe-inspiring this short event would be.
As a family we followed the gurney through the hall and down the elevator.  The entire walk took no more then 5 minutes. The people escorting the gurney were the "Honor Guard," and were made up of employees of the hospital.  They were all standing at attention outside the hospital room as the gurney was brought out.  As we made our way down the hall people observing (employees, visitors and patients) stood and put their hands over their hearts, or stood at attention.
It was extremely touching and so respectful to my dad and to our family as a whole.  It was perfect.I can't say enough about the VA and what they did for my father and our family at a time of great sorrow and sadness.  On behalf of my family I would like to thank all the people at the VA who made my dad's last hours the best they could have been.